to whom is this breast augmentation intervention aimed?

Breast augmentation with autologous fat (your own fat) has been practiced for the past 25 years. This technique has become more popular since progress has been made on the fat transfer and interest of renowned surgeons.
This technique can be offered to any woman who wants a breast augmentation, only as an alternative to breast implants or combined surgery, prosthesis and fat transfer by fat reinjection.

The breast augmentation by your own fat or breast lipofilling benefits from a scientific validation of the French Society of reconstructive plastic surgery of which I am a member.

Not only does this procedure give you splendid breasts, but also an improvement of all your silhouette (where the fat has been removed) thanks to a body remodeling.

Of course, one must have available fat on the body. This fat can be taken on any part of the body by lipoaspiration, the back, hips, buttocks, thighs, abdomen, knees etc …

A new technique exists, Water Assisted Liposuction (WAL technique or BEAULI) a device for lipoaspiration, transfer and injection of fat called Bodyjet. Continuous infiltration of physiological saline during liposuction makes it possible to remove an almost pure fat, already washed, purified, sedimented and ready for fat transfer. This technique reduces bruising and swelling by more than 70% and allows a faster recovery to professional activity. The very fine cannulas of the Bodyjet make it possible to take the fat in multiple areas even in thin women and men. If there is not enough fat available to get the size you desire, you can still benefit from a breast augmentation with mammary prosthesis alone or combined with lipofilling,.

How does a breast lipofilling take place?

As with any surgical procedure it is advisable to inform the surgeon about ongoing treatments and to avoid especially aspirin, anticoagulants and anti-inflammatories 2 weeks before the operation.

Autologous breast augmentation surgery lasts about 2 hours and can be performed under local anesthesia combined with sedation.

Before doing liposuction which allows to collect fat, it is essential that we check the parts of the body that will be treated.

The patient is standing and the areas of liposuction are marked of the different zones to be treated. The fat is collected from the different areas chosen before, then it is purified and cleaned before being reinjected into the breasts. This is your own fat hence the name of autologous fat injections in the breasts.

The intervention of breast lipomodeling is finished by the installation of a elastic panty and stockings. The medical bra can be worn only the next day.

What are the consequences of breast augmentation by autologous fat injection or breast lipofilling?

Slight and small bruises are frequent in the aftermath of the intervention (depend on each individual) but are resolved very quickly.

Normally the procedure is not painful even though you may have an impression of discomfort the first 2 days where the fat has been aspirated by liposuction. Normal activity can be resumed in less than one week and normal exercises after 3 weeks.

Are there complications after breast lipofilling?

The use of the Bodyjet significantly reduces edema and postoperative bruises. As in most surgeries you will have to follow postoperative recommendations 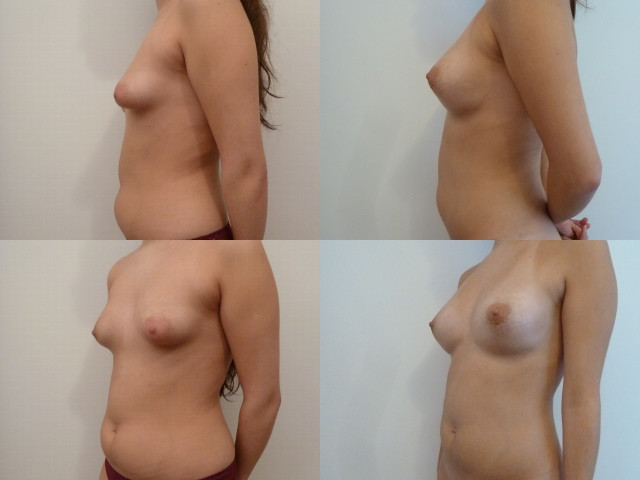 What is the expected result of an autologous fat augmentation surgery?

The lipofilling of the breasts gives a real liposculpture of the breasts by living cells.
The fat injected is composed of living cells adipocytes and stem cells. It is a transplantation of cells from one part of the body to another. Not all cells survive the procedure, which is why it is normally expected that 70% of the fat will endure, which means that the breast will lose about 30% initial postoperative volume during the first few months. We talk about 30% resorption because they are cells that do not have enough vitality during fat transfer. If necessary, the procedure can be repeated by a second session of lipomodage six months to a year later. The fat cells injected into the breasts are alive, which means that if you gain weight, the chest will also increase in size and if you lose weight, it will decrease.
This intervention does not pose a problem doing a subsequent mammography and does not prevent breastfeeding. The body of the patient is thus sculpted thanks to the liposuction it has benefited for the removal of the fat. It is a true liposculpture of the body and a lipomodeling of the breasts.