The purpose of the facelift is to remove the loose hanging skin that has developed over the cheeks, along the jaw line and in the neck. Frequently the deeper structures under the skin such as muscles and fascias are also slackened. Even the structure of the bone needs sometimes to be remodeled by implant or fat grafting ( through ingection of your own fat) to achieve a better result. The new structure of the face frequently brings dramatic improvement to the profile which really lift the spirits of the patient.

It is commonly believed that the facelift itself is the same as surgery of the entire face. In reality it is often the case that several other independent operations are needed to achieve a total rejuvenation of face.

A facelift can be performed already when the signs of aging start to appear, or long after they are well-established. The level of improvement of the surgery is directly related to how serious are changes the face went through over time. If the skin of the face is very loose, one can expect a dramatic result from the surgery. If the slackness of the skin is moderate, the final result will also be less noticeable.

The best candidate for facelift is usually a woman between 40 an 55 years old, with a slim figure, with high cheekbones and relatively sharp jaw line,

It is also an advantage if skin does not have too many wrinkles, because then the skin texture itself is not damaged and doesn’t need other improvement procedures such as laser or peelings.

However, to have the patient matching this description is very rare. The more usual case is that the surgeon at the consultation makes a very thorough analyze of the face, and can at the time of surgery correct the discovered defects, and as a result create a fully rejuvenated face from all points of view. A facelift together with the correction of the other areas of the face, such as eyelids and forehead, is called a total facial rejuvenation, and many surgeons believe this to be one of the most fulfilling and successful surgeries within the field of aesthetic plastic surgery.

A forehead/brow lift is often done together with a facelift to achieve a more balanced look of the face.

As with any surgery there are rare but possible complications. Sensibility of the skin in the face can be impaired for a shorter or a longer period of time. It is also common to have bruises, but they normally disappear within one or two weeks. Other possible conditions are longer-lasting swelling, infection, a post operative hematoma that requires some intervention, or a temporary weakness of muscles in the face. There is also a smaller but nevertheless existing risk of delay in healing or a small necrosis of the skin within the operated area, especially among heavy smokers as they have a bad arterial and venous circulation. Most of these conditions heal by themselves without any further interventions.

DIFFERENT LIFTINGS OF THE FACE

The mini facelift is what we call secondary surgery, that is made several years after a facelift, and its purpose is to prolong the effect of the first facelift. This operation includes only some pulling of the skin and  is using the same incision points as the first surgery. This type of surgery will therefore not give any effect if it is performed as a first operation,  and that is why it is not recommended to have this type of operation instead of a full facelift, even if the recovery time is shorter.

There are today several different techniques to perform a facelift. Which method will be used depends largely on the patient’s condition and age. This can only be decided at the consultation after a thorough examination.

Usually incisions are made around the ears. This way the scars are hidden in the hair line and follow the contour of the ear in a perfectly discreet way so they become almost invisible after few weeks. The length of the scar varies with the technique used which is always adapted to your needs and  your amount of loose skin especially in the lower face and in the neck. The skin is tightened, and the excess of skin is removed. The incisions are closed with a suture under the skin to avoid leaving any stitch marks. This technique is used on patients with loose skin, but firm underlying tissues.

SUCUTANEOUS FACELIFT WITH TIGHTENING OF THE MUSCLES (SMAS)

Today´s modern techniques is not only treating the skin but also underlying muscles and fat. The thin layer layer of muscles undre the skin of  the face is called SMAS. By tightening also this deeper layer, we get a longer lasting effect. It looks more natural because we don’t have to stretch the skin as much. You can also avoid the wider dessection of the skin, which is an advantage, as this gives a safer blood circulation afterwards. This method is therefore always used on patients who are smokers. The resulting scars around the ears are the same as discribed before. This method is the most common one used for face lifting. The surgery usually takes 2 to 4 hours depending on technique, unless a simultaneous surgery is done, for example eyelid surgery or a forehead lift. In many cases, a small fat filling of the cheeks and cheekbones will be done additionally to give more fullness to the face.

It can be done separately or in combination with other proceedures. It consists of either a lower blepharoplasty approach with an incision under the eye lashes , or an insicion behind the hairline, and a subperiostal dissection of the cheekbones (malar region) and the upper cheeks. It is recommended in case of loss of volume of the upper cheeks region due to vertical downward migration of the tissues.

On the morning before surgery, you should wash your hair and remove all makeup. If you are wearing dentures, you should wear these during surgery. The operation is performed either with a general anesthesia, or under a local anesthesia with sedation (you will be fully asleep in both cases). Regarding medication, it is extremely important that you do not take any medication during 2 weeks before surgery except those accepted by the surgeon or the anesthesist, especially  it concernes aspirin related drugs. 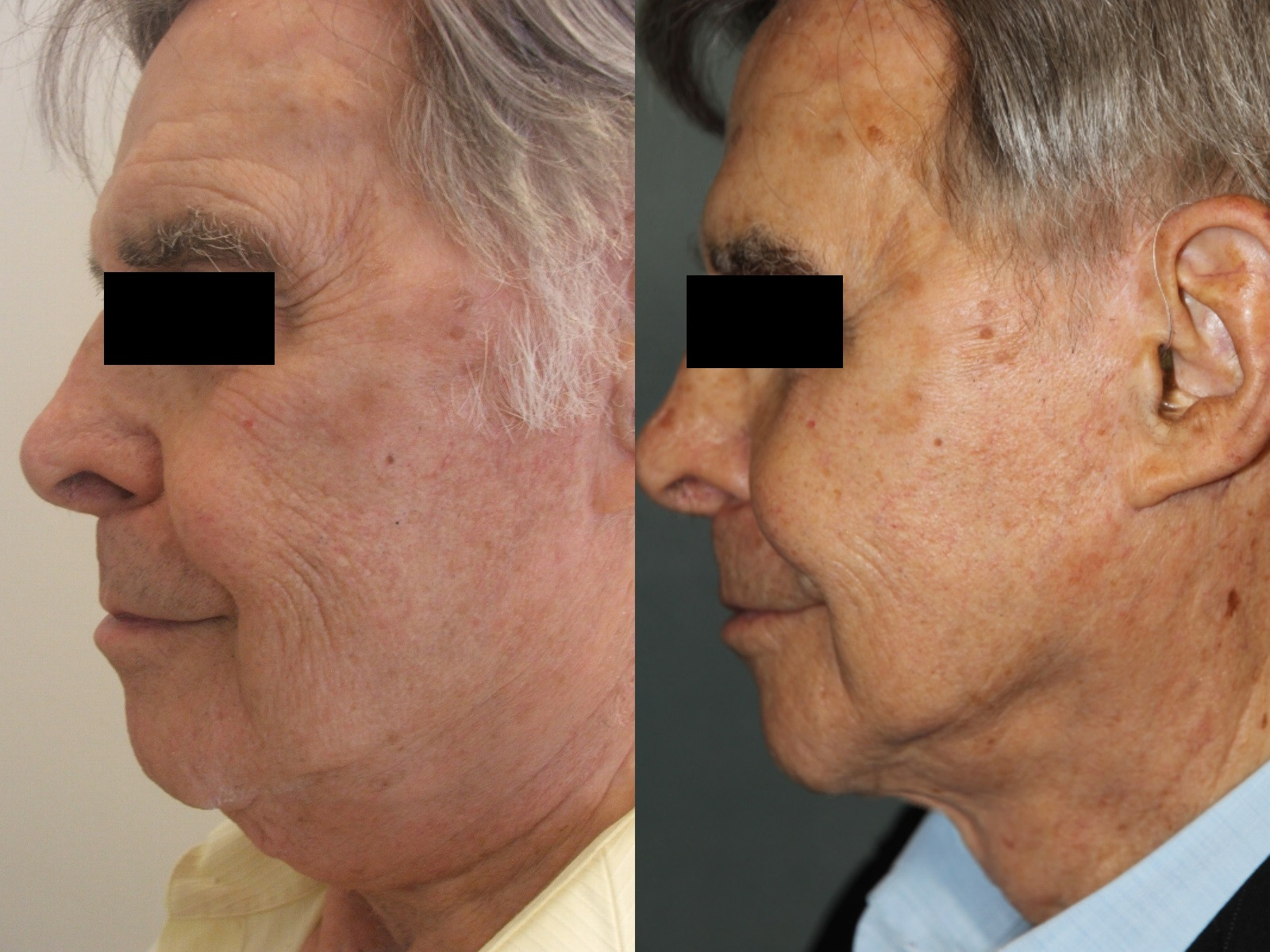 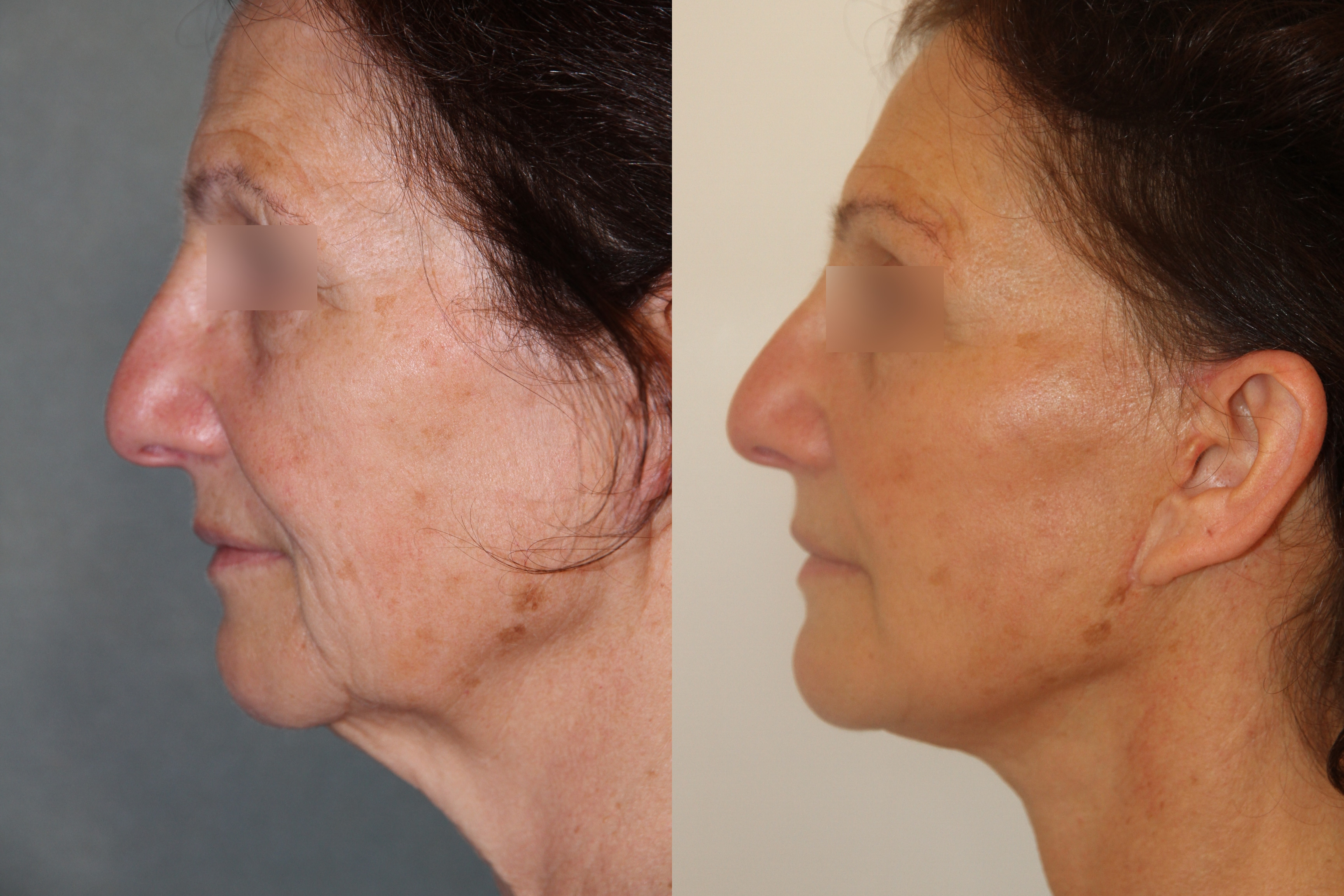 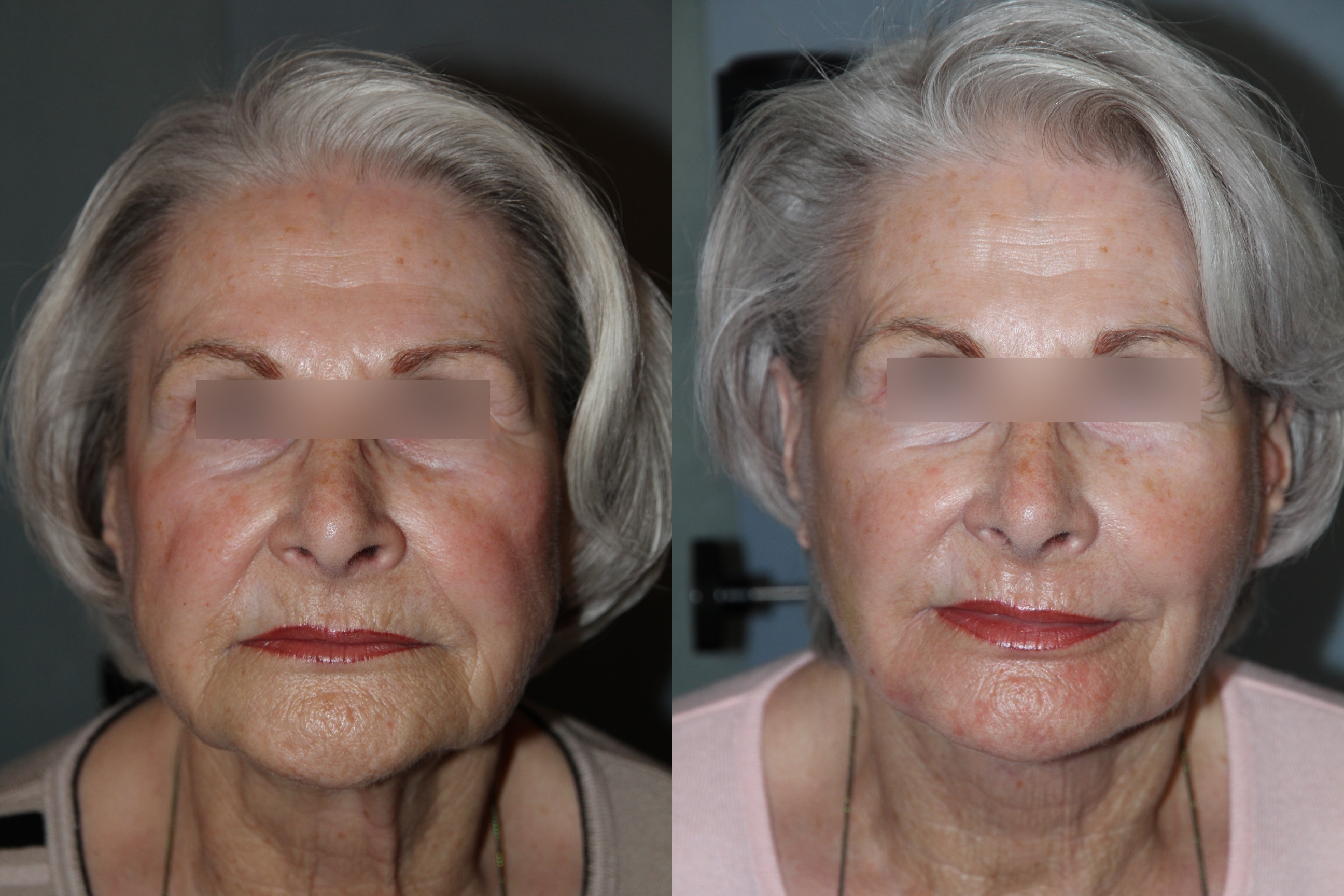 To make the scars as invisible as possible, the sutures are removed at different times, as the thickness of the skin varies in different areas and therefore heals differently. You may wash your hair the first day using a mild shampoo and normally can use makeup after one week. Be careful with brushing and avoid hair coloring or other chemical treatments the first 4 weeks. Usually you can resume your work  within 3 to 4 weeks. Most of the incisions will be hidden behind the hair line and will not affect your hair style.

There is no post operative pain associated with this surgery, but most patients feel tired during the first 2 weeks.

It is also normal to experience tension from the sutures under the skin that keep muscles in place over the neck and also in the area of the temples. These are used to reduce the tension of the skin and thereby result of scars as invsible as possible.

The face and the neck can be swollen and have some bruises, but the bruises ususally disappear in period from 7 to 14 days. There is also normally a lower sensibility around the ears and over the cheeks which returns to normal within 3 to 6 months.

The surgery will remove the sagging of the skin and the wrinkles associated with this, but it does not change the structure of the skin. We therefore recommend that patients engage in a skin care program that will bring out the full beauty and youthfulness after the surgery. It is also important to avoid direct sun and UV radiation within six months after surgery.

Avoid all excessive turning of the neck during the first three weeks as this can give wider scars. No golf, no tennis, no horse riding in the 2 months following the surgery.

Welcome to your new life !